Oh gin, how you suit citrus so well.

I hit a boon the other day. there is a market nearby me here called North Park Produce. Very cool place, lots of choices for your greek, middle eastern, etc. type of cuisine. I needed garbanzo beans to make hummus so I popped in to grab some. Given I can't just walk in, get the one thing I came for, check out and leave, I wandered through the produce section.

And there it was, a display of really reduced produce. Including several large bags of blood oranges...for only 99 cents each. I couldn't believe it. They didn't appear to be rotting, so I grabbed four big bags. 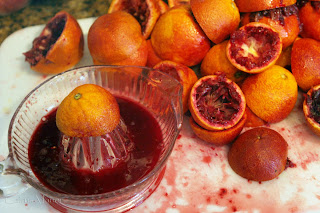 And I promptly came home and juiced them all. I was hoping they'd be ok for eating, but they were all a bit soft, not bad by any means, but if I was going to get any use out of them, I'd have to do it today. So about 45 minutes of juicing later, I had half a gallon of blood orange juice. And I decided to drink some.
Blood Orange Cocktail
1 cup blood orange juice
1-2 shots gin
2-3 teaspoons honey
Ice
Club soda or sparkling water
Combine the orange juice, gin and honey in a shaker with a handful of ice and shake well. Pour over additional ice into two tall, cooler type glasses. Top off with the club soda or sparkling water (I had Pelligrino on hand and used that).
Posted by Jo at 6:00 AM