As I have gotten older, been on my own, furthered my cooking abilities and skills, I've found myself going back to foods I once considered yucky.

Yes, that's a very mature word I used there. Yucky. I will be 32 in a few months and I still find the word appropriate in many circumstances.

Take beets for example. They weren't something my mom cooked much at home when I was younger, so my run ins with them involved cold, slimy specimens at salad bars. In that state of existence they taste like cold, oddly textured dirt. Not very appetizing. I'd skip over them and their staining capabilities for something safer like blueberry muffins.

Now though, at a much more mature age, I've found (via my CSA) that beets aren't always yucky. Fresh and prepared in a different way, beets can be sweet and not taste like a mouthful of dirt.

I had 2 varieties of beets to work with, a traditional red color and a lighter yellow/golden beet. The method takes a bit of time as the beets need plenty of time to cook through, cool, then be peeled and finished off very simply, but it is worth the work. Even my Husband proclaimed that they couldn't be "beet."

Yes he actually said that. Yes, he does things like that quite often. It is part of his charm. It's a good thing I love him.

Preheat your oven to 400 degrees.

Wrap the beets with aluminum foil creating two packets. Roast in preheated oven for 1-1.5 hours until tender. Allow to cool enough so they can be handled and removed the skins. Cut each beet into 6-8 slices.

Lightly coat a cookie sheet with the olive oil and place the beets on it. Sprinkle with the salt and basalmic vinegar, tossing to coat. Roast in the 400 degree oven again for 10-15 minutes until the beets are again hot and the edges aren't quite beginning to brown. Serve drizzled with additional vinegar if desired. 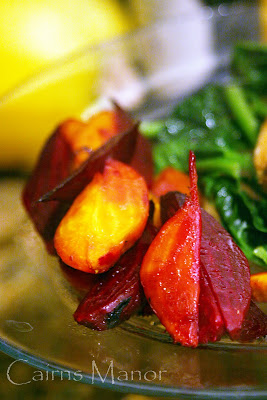