When we were looking at houses last year, we saw quite a few with a variety of stuff in the backyard. Some had lemon trees, a couple had avocado trees, one even had a very overgrown fig tree.

The house we finally had an offer accepted on had what we thought were a lemon and a lime tree. Turns out they are both lemon trees, and we have more lemons then I ever imagined I would. And I am hurriedly finding ways to use them.

One thing I was introduced to by my father in law in Limoncello. It's a very popular thing now, I've stumbled it all over the interwebs. Heck, even Danny Devito got in on it and has his own brand.

My father in law loves the stuff, so we are taking advantage of that and making some for him for his birthday. I got it started on Tuesday.

It's really easy, well, at least so far it is. I zested 8 lemons and dumped a bottle of Everclear (151 proof) over them, the set it into the dark of our bar to marinate away. 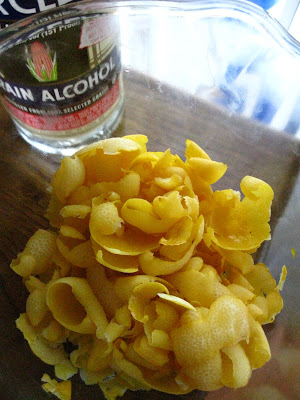 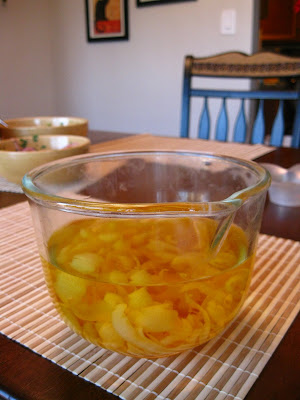 Here is our before, and after from the other day. The alcohol is taking on a fab yellow hue and lemony smell. It still needs about 40 more days of stewing time, which will actually put us beyond my father in law's birthday, but I think he will understand.

The other thing I've done with lemons lately was make a cake for the husband's birthday. This was another Epicurious recipe and I went with lemon since I had 8 lemons sitting in my fridge with no zest. Unfortunately, I only left myself with a few hours to put this cake together, so I didn't make my own lemon curd. I used half store bought, half made by my mother in law. 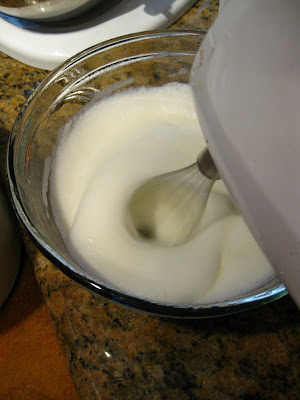 Whipping the egg whites didn't take long at all and the cake came together easily. My only issue was the bake time. I set my timer for 15 minutes and when I checked at 14 minutes, the cake was done, likely a little over done. I might actually increase the amount of batter as well, the cakes are meant to be thin, but I really thought they were too thin, I wouldn't double the recipe, but likely would make 1 1/2 recipes for the batter. I wanted a little more height to the whole cake. 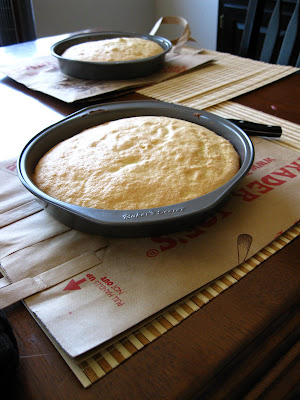 I did follow a recommendation left by one of the recipe reviewers and after letting the layers cool some, I popped them in the freezer for about 15 minutes to left them firm up a bit and make it a little easier to slice the layers in half. 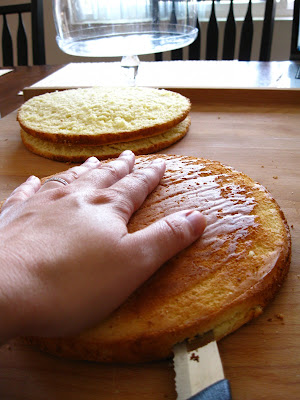 I used the homemade lemon curd in the frosting/filling and the store bought in between the layers. I also used a jar of raspberry preserves I had in the fridge between two of the layers for a little variety. The raspberry was a great addition, and the frosting? To die for. I love mascarpone anyway; adding lemon curd and sweetened whip cream took it over the top. It is great on it's own. Or with the addition of a spoon. For the eating.

The end result was delicious, my husband loved it.
I don't have piping bags, so my frosting has a rough look to it, but no one held it against me.
I will be making it again, next time with my own lemon curd, I have some lemons to spare. 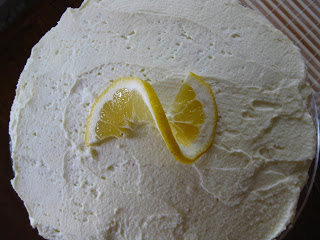 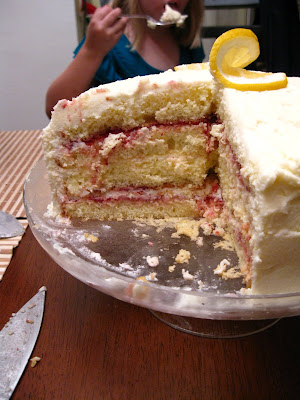