Blogging in flight no less 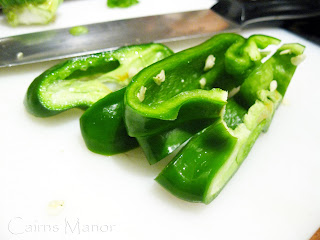 I am currently on a flight to Oregon to visit my sister, brother in law and niece for an extended weekend away. And if Alaska Airlines didn't want 10 bucks from me in order to get completely online and post this, it'd be an even better success for in flight blogging, but for now, typing up and posting later will have to do.

I didn't intend for there to be such a gap in postings lately. Truthfully, I've been so busy the last couple of weeks between work and home projects, blogging kind of had to fall by the wayside.


Our current, still unfinished unfortunately, project is an update to our kitchen. A true remodel is a few years off, so we decided to at date the look of the cabinets with new hardware and paint. We also hoped to be able to correct some of the oddness of doors that wouldn't close or were set funny. We mostly suceeded. Kind of. Not really. 50 year old cabinets with 20 year old mis measured replacement doors equals a kind of odd mish mash of quality and hindered our ability to make things as near perfect as I had hoped for. I don't have final project pictures yet, we still need to finish installing handles, but the look is really nice compared to the before.

And I think our bedroom may be ready for a big reveal as well. One of the last thngs I'd been scouring the internet and Craig's List for were midcentury style nightstands. I finally found ones that we liked, were the right stain and a matched set. They are a modern take, but the lines were perfect and I didn't have to refinsh a thing.

In the meantime, cooking has been harder with the kitchen mostly out of commission, but we managed with quite a bit done in the crockpot until we had the stove back in place. I will get one or two of the recipes i tried in the slow cooker posted in the near future. This really fast meal was one that we threw together after work earlier this week. It is really basic, but with good flavors and it is healthy. It also gave me a chance to use some poblano peppers from the garden. I am just surprised to get anything from the plants. First, with our way cooler than average summer, they weren't getting the heat they liked and secondly, the zucchini plants next to them really grew sideways more than I expected and shaded them even more. Thankfully for the pepper plants, I pulled the Eight ball plants out a few weeks ago to make room for broccoli and cauliflower plants, so they've shot up and are busily kicking peppers out. I even have some jalapenos waiting to be used.

For the poblanos first meal, I made a super easy, super fast saute. I should say we made. My husband and I pulled this together Monday night after we were both home from work. It was ready to go by 8:30, and I walked in the door at 8:05 that night. This isn't a dish to wow guests with, but it is something good and healthy. We avoided a trip through the drive through that night with this meal, and I think that is a big win.


Coat a large nonstick skillet with cooking spray and place over medium-high heat; add oil. When hot, add onion and peppers; sauté until softened and lightly charred or golden in spots, about 6 to 7 minutes.
Add turkey; brown meat, breaking it up with a wooden spoon as it cooks, about 4 minutes.
Stir in cumin, oregano and salt; cook 1 minute until fragrant.
Stir in canned tomatoes, beans and water; bring to a simmer. Cover and simmer, stirring occasionally, to blend flavors, about 5 minutes. Stir in cilantro; remove from heat. Serve topped with lettuce and tortilla chips. Drizzle with fresh lime if desired. 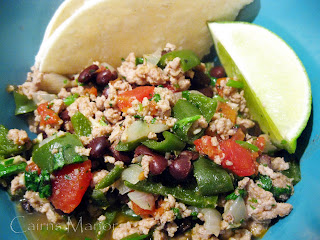