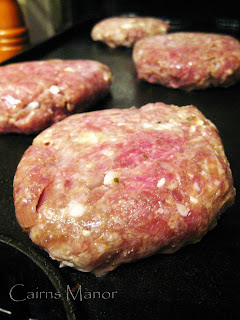 I am sad to report the last meal from my week of planning is a hamburger, filled with onion and blue cheese. The hamburger itself was delicious, but I am sad that I didn't get to the other two meals I had planned for the week, a potato soup and a hash topped with a poached egg. I came down with a bug in the middle of the week and was even sick enough to go to the doctor to be sure whatever it was wasn't turning into strep throat. Even the doctor wasn't sure and gave me a prescription of antibiotics to hole on to if I wasn't feeling better in 24 hours. Bleh. Thankfully, I ended up feeling progressively better and didn't need the antibiotics.

The first night I felt sick  last week my Mom fed us and the next night my husband brought me home pho, and come Friday, we had burgers, which isn't a bad way at all to end the week.

The inspiration for having hamburgers came, again from the Farmer's Market. One of the stalls had several varieties of sprouts, including onion sprouts. I had the chance to taste them, and they had such a yummy, fresh oniony bite to them, I grabbed some to bring home.

That night we tried them in a salad and they were excellent, but something the girl running the stand mentioned stuck with me, how the sprouts would be excellent on a burger. My husband agreed, and I sought out a recipe I thought would be perfect for the sprouts. 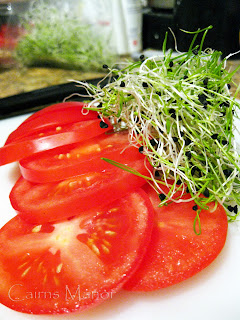 I ended up deciding on a blue cheese filled burger because we love blue cheese and thought nothing could be better with the onion sprouts.

The burgers came together really quickly, I pulled them together on  Monday while prepping to make the bolognese sauce, since they both shared the ground beef and onion component, I was able to chop and saute a little extra onion and split the ground beef i bought between the two.

The recipe I referenced actually was for a blue cheese stuffed burger, but to make it a little easier on me for assembly, I just mixed the blue cheese in the hamburger. Some of the surface pieces stuck a bit to my skillet, but the flavor was good and the prep was so much easier this way.

We loved the burgers, they were fabulous, but we were both a bit sad that the blue cheese completely overwhelmed the taste of the onion sprouts. So next time, a basic burger is the plan to let those onion sprouts shine through. But don't let that keep you from trying this burger, it was really, really good.

Adapted from My Recipes

Shape into four patties and either cook on gas or charcol grill over medium heat, about 4 minutes a side until done or on indoor grill/skillet over medium heat the same amount of time.

Serve on english muffins with your favorite burger toppers. 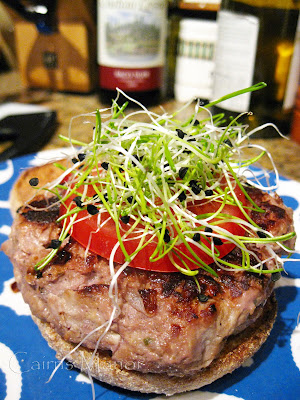