Another try at Sweet Potatoes. 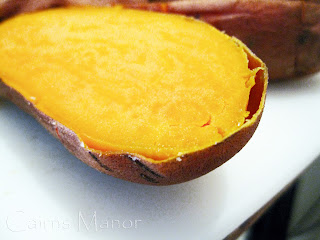 When it comes to side dishes that should be on the table on Thanksgiving, in my family, sweet potatoes/yams are one that will only get eaten by 3 people; me, my Mom and my Grandma. My Mom has tried many different incarnations of recipes, sweet, savory, spicy, none of them have gone over as a huge success.

This year, I am trying again to get the rest of the family on board with sweet potatoes. Instead of mashing them, topping with strudel or marshmallows, I am making dumplings. Gnocchi to be exact.

Now, I've never made gnocchi before. Eaten them yes, made them no. A couple of weeks ago I was watching the Cooking Channel and caught an episode of Everyday Italian where Giada is making Thanksgiving sides and she made this amazing looking gnocchi with a sweet brown butter sauce. They sounded great. I ran the idea by Mom, she agreed they sounded delicious.

Then I went to the Food Network website to find the recipe. And I checked out the reviews, as I am wont to do before trying a new recipe.

I'd be lying if I wasn't concerned.

A lot of people loved the gnocchi, but an equal amount said the recipe was flawed, they needed to use cup after cup of flour to make it a workable dough and that they texture was off, more gooey than anything. Others added an egg to make the dough stay together. Some had no problems, until they tried to cook them and had the gnocchi completely fall apart in the boiling water.

Glimmers of hope were to be found amongst all those reviews though. Some had great success and made recommendations. 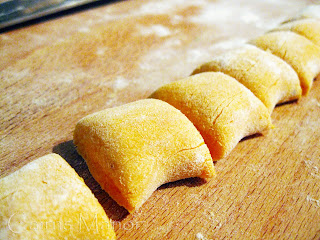 The first thing I did was to allow my riccotta to drain overnight. It pulled off a a scant 1/8 cup of water, so not a lot, but maybe enough to not make the dough too sticky.

The recipe itself is really quite easy. I pulled together a batch and got to forming them.

The dough was soft, was not impossible to handle, exactly what I expected for a dumpling. It rolled out quickly without too much sticking to my board, as long as I kept it well dusted with flour.

My next concern was how they would hold up to boiling. After I formed the first batch, I cooked some of the gnocchi up and they held up really well in the water, none of them fell apart.

So, for me, the recipe was a big success. I even had a chance to try out the sauce before our Thanksgiving dinner which is always a plus. I won't make any changes to the recipe yet, but I have some pancetta for green beans, I may use some with the gnocchi as well.

So despite my concerns and the so so reviews, I think these are a great success.

For the Gnocchi: Preheat the oven to 425 degrees F.

Pierce the sweet potato with a fork. Bake the sweet potatoes until tender and fully cooked, between 40 to 55 minutes depending on size. Cool slightly. Peel and place flesh in a mixing bowl. Mash the sweet potatoes. Add the ricotta cheese, salt, cinnamon, and pepper and blend until well mixed. Add the flour, 1/2 cup at a time until a soft dough forms. Lightly flour a work surface and place the dough in a ball on the work surface. Divide the dough into 8 equal balls. Roll out each ball into a 1-inch wide rope. Cut each rope into 1-inch pieces. Roll the gnocchi over the tines of a fork. Transfer the formed gnocchi to a large baking sheet lined with parchment paper. Continue with the remaining gnocchi. At this point, you can freeze the gnocchi on the cookie sheet. Once frozen, transfer to a ziploc freezer bag until ready to use.

When ready to cook, bring a large pot of water to a boil over high heat. Add the gnocchi in small batches and cook until the gnocchi float to the top of the water. Drain the gnocchi using a slotted spoon onto a baking sheet.

For the Brown Butter sauce: While the gnocchi are cooking melt the butter in a large saute pan over medium heat. When the butter has melted add the sage leaves. Continue to cook, swirling the butter occasionally, until the foam subsides and the milk solids begin to brown. Remove the pan from the heat. Stir in the cinnamon, maple syrup, salt, and pepper. Careful, the mixture will bubble up. Gently stir the mixture. When the bubbles subside, toss the cooked gnocchi in the brown butter, allowing to come back up to temp. Transfer the gnocchi to a serving dish and serve immediately. 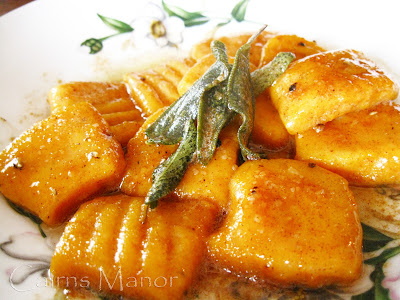