A very late Thanksgiving run down. 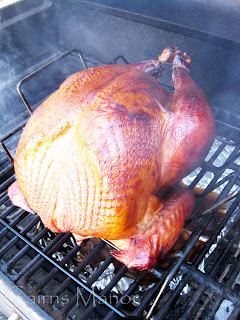 Due to my work schedule and some technical difficulites, (meaning my laptop picked up a virus, yuck), I wasn't able to access the internet at all for about a week.  Now, my computer is STD free, I am relaxing after some time with friends and some extreme house painting and can finally getting around to talking about my Turkey day.

When I was thinking about how to do a round up of what I made and ate for Thanksgiving, I had a hard time deciding how to go about putting everything up here. Should I go with one post for each recipe? Should I break it down by type of side, like veggies one day, starches the next?

I ultimately decided, one because it is December 8th, and two I didn't manage to get good individual pictures of every. single. item. to just do a catch all type of post. Lots of links to recipes online ahead 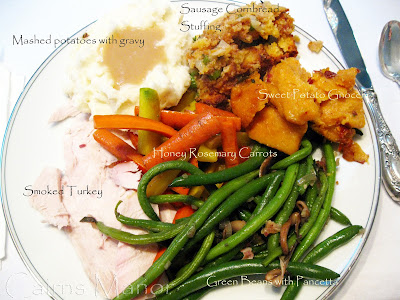 Yes, that is my plate of food. There is one side my Mom made missing because it took a bit longer to bake than expected. I will actually be making that side for Christmas Day dinner and will post it around then because it was so, so good. Now on to what is there.

Going counter clock wise starting with the Gnocchi, which I blogged about here. They were still very tasty after being frozen, but turned a bit gummy. I did change one thing though, I boiled them in salted water, which seemed to be the downfall for many in reviews of the original recipe. I will definitely make them again though, maybe even try freezing them again as well.

Next we have our stuffing, which you can find here. I made one big change to the recipe, the day of I asked the family what pork product they wanted in their stuffing and the vote was for sausage. So I used 8 ounces of bulk pork sausage. I also didn't make the corn bread recipe Epicurious calls for, I used a box mix from Trader Joes. I used a little more than double the amount of cornbread called for, and while the stuffing was delicious, the sausage was scarce, so a full pound would be best of you double or triple the recipe.

Next to the stuffing are the mashed potatoes and gravy. No real recipe here. Peel and boil your potatoes until fork tender. Warm up butter and twice as much milk/half and half/cream in the microwave. Mash the potatoes and add the butter/milk, etc. mixture until you get to a creamy consistency.
For the gravy, I melted a stick of butter in a saucepan and added a scant cup of flour to make a roux. I cooked the roux for a couple of minutes then whisked in my turkey stock and cooked until thickened, adding salt and pepper to taste.

Next up is our turkey. So good. We used a buttermilk brine, which takes it's inspiration from here. Now, given this recipe comes from Williams-Sonoma, they want you to buy and use their brine blend. But you really don't have to. If you already have a brine you like, keep it, cut back on the amount of water you use and replace it with buttermilk. If you don't have a brine recipe you like, might I suggest this one from Alton Brown? It's a great recipe, our roast turkey was cooked using his technique.

And lastly, our two veggie sides, the green beans and the sauteed carrots. Both very good and very easy. I made no changes or adjustments to either of these recipes.

So that was my Thanksgiving dinner, hope you and yours had a good time and great food!
Posted by Jo at 2:46 PM