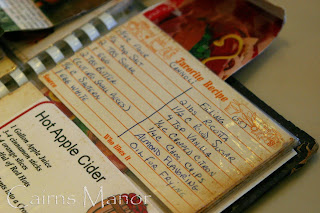 Happy New Year's Eve everyone! I hope 2011 brings you many blessings and much joy.

Between cooking dinner with my mother in law and running out to take pictures of the last sunset for the year, I have spent the afternoon learning to make cannoli from the recipe my mother in law's Aunt Mary gave her.  Aunt Mary was from Sicily, and quite the chef. When my in law's had moved into their first house, Aunt Mary came for a 5 day visit and went through 25 pounds of flour making pizza crusts, pasta and gnocchi to fill up their chest freezer. 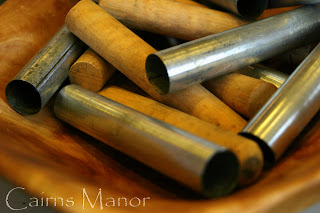 Every Christmas she made traditional Italian cookies and cannoli. When she passed away, my mother in law Eileen inherited her wooden cannoli molds. These molds were cut from her broom stick, one of them even has the rounded end still. The only reason anyone even has the recipe is because Eileen wrote it down. The card is now yellowed around the edges and has some drops of something on it, which can only mean good things in my book.

This afternoon and evening, with Eileen there to guide me, I made my first batch of cannoli. The dough is a tough one to roll out, and mastering keeping the rounds of dough on the molds when you drop them in the oil ( I had only two turn into little tortilla cannoli) was a bit of work. The end result was so, so worth it. Now I am the proud owner of half of the molds, and will be able to make my husband one of his most favorite desserts whenever we feel like it.

Combine the dry ingredients on a nice clean, flat surface and form a well. In the center of the well drop in the egg and butter. Using a fork, blend the egg and butter into the dry ingredients a little at a time until just combined, then begin adding the wine 1 tablespoon at a time, mixing untilthe dough just begins to form. Shape into a ball and allow to rest for 15 minutes.

After dough has rested, roll out on lightly floured surface to about 1/16" thick and cut into 3 1/2 inch circles, rerolling the scraps until done. After all the dough is cut into circles, roll them slightly into an oval shape. Wrap them around your cannoli forms, overlapping slightly at the top, sealing with a small amount of the beaten egg white.

Cook the cannoli on the molds in oil heated to 350 degrees until puffed and brown, remvoe from oil on mold and allow to cool before remvoing the cannoli shells.

Combine the riccota, sugar, vanilla and almond extract and mix to combine. Fold in your choice of the chocolate chips, orange peel or pistachios.

Pipe or spoon the filling into the cooled cannoli shells, leveling off the filling at the egdes of the shells. Dip the ends of the cannoli in the chocolate chips or pistachios and serve immediately. 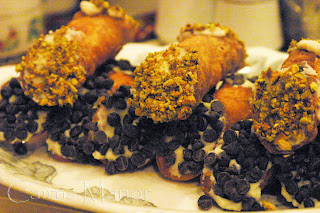