Mark yesterday on the calender... 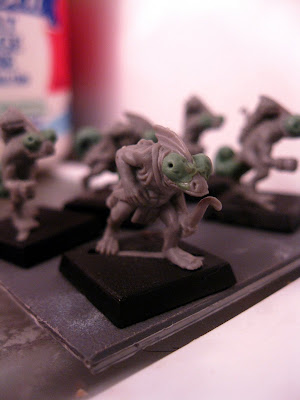 My husband willingly ate a portion of fish. More on that later.

Yesterday was a really productive day for me. Now that school is out and life is settling into a normal routine of me just working and not working, studying, going to clinicals, studying some more, etc. etc. I am getting projects done around the house.
One of them was cleaning and organizing the fridge, freezer and pantry. I finished up the fridge and freezer today, including these guys belonging to my husband. Have I ever mentioned my husband is a nerd? And plays miniature games? And as such paints them? Occasionally he also uses clay to alter them and leaves them in the fridge overnight to cure. And for me to find the next day when looking for the cottage cheese for breakfast. 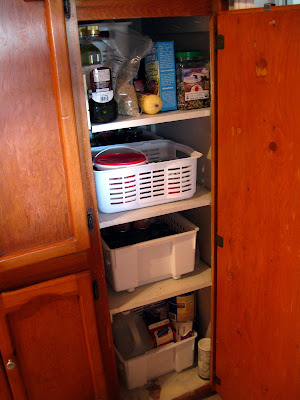 My biggest task yesterday was organizing and cleaning out out pantry. When we moved in, we had shelves and not much else. Over time, as we shopped, things basically got shoved into the pantry and were never seen again. This was how I ended up with multiple packages of corn meal, cornstarch, syrup, and cake flour. I also discovered I had Knox gelatin and raisins.
For now, this is a stop gap. I used pull out drawers and baskets from Rubbermaid, which will work well until I get a new cabinet set up in the kitchen. We've got a plan in mind to hopefully get more pantry space, counter top space and maybe even better lighting.
My other immense task yesterday was making fish and having my husband eat it. He isn't known as a fish eater. Although he likes sushi/shashimi. He isn't a big fan of the flakey texture and fishier taste cooked fish has. But he will eat fried fish and chips. He is a finicky fellow.
I on the other hand love fish. I tend to only eat it when we go out to eat.
Bring in Noble Pig. I love fish and her blog. 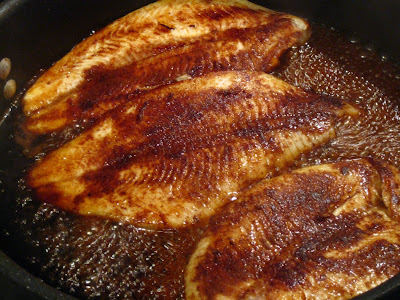 She took Tilapia, seasoned it with Chinese 5 spice and gave it a brown sugar soy sauce reduction. 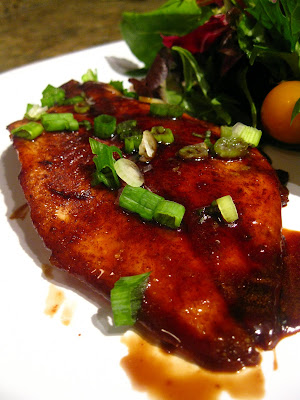 And my husband liked it. Thank you Noble Pig. I now have a fish recipe I can freely cook at home.
Five-Spice Tilapia
From Eating Well via Noble Pig
1 pound tilapia fillets
Chinese five-spice powder, enough to cover fish
1/2 cup reduced-sodium soy sauce
1/3 Tablespoons light brown sugar
1 Tablespoon olive oil
2 scallions, thinly sliced
Sprinkle both sides of tilapia fillets with five-spice powder. Combine soy sauce and brown sugar in a small bowl.
Heat oil in a large nonstick skillet over medium-high heat. Add the tilapia and cook until the outer edges are opaque, about 2 minutes. Reduce heat to medium, turn the fish over, stir the soy sauce mixture and pour over the fish and into the pan. Bring the sauce to a boil and cook until the fish is cooked through and the sauce has thickened slightly (make sure not caramelize sugar), about 2 minutes more. Add the scallions and remove from the heat.
Serve the fish drizzled with the pan sauce.
In the original recipe, the ingredients for the sauce were halved, I doubled them to have more sauce, but dropped the amount of green onions by one.
Posted by Jo at 10:42 AM